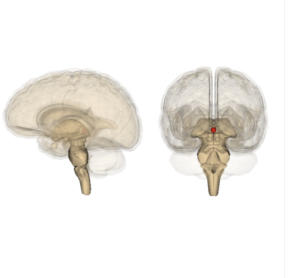 Your pineal gland, part of the endocrine system in your brain, plays a key role in regulating almost every function in your body, including reproduction, executive function, growth, body temperature, blood pressure, sensory and motor activity, sleep, mood, immune function, appetite, and longevity.

The pineal gland sits in the epithalamus located beneath the cerebral cortex where the two hemispheres of the brain meet. It sits at the level of your third eye (6th chakra). In addition to regulating physical and mental functions, the pineal gland is associated with perception, thought, morality, intuition, and even clairvoyance. In fact, French philosopher René Descartes believed that the pineal gland housed the soul. In some cultures, the pineal gland is deemed to be a portal to higher dimensions.

The Unique Functions of the Pineal Gland. The pineal gland regulates your body’s circadian rhythm daily and seasonally. Pinealocytes (cells that make up the pineal gland) produce and regulate the secretion of melatonin. (Serotonin is the precursor of melatonin. Serotonin is acetylated and methylated to yield melatonin within the pineal gland.) Melatonin is an indole analog and plays a vital role in circadian rhythm. It is the regulator of your sleep-wake cycles, menstrual cycle, and pituitary gland functions. Melatonin also influences the secretion of neurotransmitters, endorphins, and hormones like estrogen, progesterone, and DHEA. Melatonin is associated with bone metabolism, weight loss, and cardiovascular health. It also acts as a powerful antioxidant by scavenging free radicals, immunomodulators, and anticancer agents.

Glial cells in the pineal gland maintain homeostasis, form myelin, and provide support and protection for neurons to transmit information to other cells. Interestingly, the pineal gland also contains rod- and cone-type cells like those found in the retina. These light-sensitive cells receive signals that travel down the optic nerves. So, it truly is a third eye!

Finally, the pineal gland has been linked to the production of dimethyltryptamine, or DMT. Called “the spirit molecule,” DMT is a substance found in certain plants and can be consumed as a psychedelic drug. It is possible that the brain releases DMT at death, which may explain why people brought back from death describe similar near-death experiences.

Pineal Gland Dysfunction and Sleep Disruption. Unlike the rest of your brain, your pineal gland is not separated from the rest of the body by the blood-brain barrier. It actually has one of the richest supplies of blood, so it is not protected from toxins that can build up in the body over time. Thus, your pineal gland can potentially clog or calcify. Fluoridated water is one main cause of pineal gland calcification. When your pineal gland calcifies, you are at risk for many health concerns, including neurological diseases like autism, depression, dementia, anxiety disorder, and Parkinson’s disease. The common thread is that all of these diseases are associated with abnormal sleep patterns, which are directly linked to pineal gland dysfunction.

In the 1990s, a British scientist found an endocrine-disrupting hormone that has been linked to early puberty in girls. Due to the high volume of blood flow, the calcified tissues of the pineal gland contain the highest levels of fluoride in the entire body—up to 21,000 ppm F, higher than bones or teeth. Fluoride also accumulates in the soft tissues of the pineal gland. This has been shown to reduce the number of pinealocytes, thereby lowering melatonin production. Again, melatonin influences the secretion of hormones, including estrogen, progesterone, and DHEA. Reduced levels of melatonin in children may contribute to premature sexual development and early puberty.

In 2015, research performed by MIT scientist Stephanie Seneff and others showed a strong correlation between glyphosate and neurological disorders including autism, ADHD, anxiety, dementia, and depression-related suicide. She showed that glyphosate could be causal in these diseases because it facilitates the transport of aluminum across the gut and brain barriers. Aluminum build up in the pineal gland suppresses melatonin and disrupts sleep.

Through a poor diet, environmental exposure, and even stress, your pineal gland is also susceptible to the accumulation of other toxic metals, including mercury, which has been determined to be a causative factor in autism. Mercury impairs your pineal gland’s ability to detoxify itself, making it unable to eliminate the toxic metals is has accumulated. This creates a cycle where toxic metals are more easily absorbed into the brain. Toxic metals also interfere with sulfate synthesis, which results in accumulation of cellular debris.

10 Signs Your Pineal Gland Is Calcified

Many common physical and emotional symptoms are caused by a calcified pineal gland  unable to produce the proper amounts of melatonin. Here are 10 signs you need to detoxify your pineal gland:

1.    Impaired circadian rhythms. Sleeping too much or too little, feeling active and restless in the middle of the night, feeling sleepy at unusual times, or not remembering dreams may all highlight pineal gland dysfunction due to calcification.

2.   Headaches. If you suffer from headaches, including nocturnal headaches and migraines, it may be coming from your pineal gland. Research shows that pineal cysts can be the cause of headaches in women and are more common in women as they grow older. Vertigo, nausea, vomiting, and tremors may also be symptoms. Pineal cysts can cause a deficiency in melatonin. Radiology reports often show calcification of the pineal gland along with cysts.

4.   Changes in fertility. Circadian rhythms and fertility are interconnected. The pineal gland plays a vital role in regulating female hormones and the menstrual cycle. In addition, a 2014 study shows that healthy melatonin levels are necessary for optimal fertility. One reason may be that melatonin acts as an antioxidant in the ovaries, removing free radicals and preventing cellular damage.

5.   Osteoporosis. While postmenopausal osteoporosis accounts for 90 percent of all cases and is primarily associated with estrogen deficiency, there is evidence that a substantial decline in melatonin and an increased rate of pineal calcification may contribute to the disease.

6.   Seasonal affective disorder (SAD). Too much melatonin can make some people feel sad and sleepy, especially in the winter months. Research shows that melatonin is a biochemical marker for Seasonal Affective Disorder (SAD). The good news is you can reverse SAD symptoms with exposure to bright, full-spectrum light. Detoxifying your pineal gland may also help reset your body’s circadian rhythm.

7.   Depression. Studies show that people who suffer from depression, including major depressive disorder (MDD), have been found to have circadian rhythm dysfunction and sleep disturbance caused by pineal gland abnormalities.

10.  Neurological disorders. Calcification of the pineal gland may play a role in neurological diseases including dementia, Alzheimer’s, epilepsy, and Parkinson’s disease. Some health authorities say pineal gland calcification is a serious concern and potentially a major risk factor for neurodegenerative disorders. Melatonin is known to inhibit the formation of amyloid plaques, so it may be effective in preventing Alzheimer’s.

How to Detox Your Pineal Gland

2.   Clean up your diet. Eat lots of organic fruits and vegetables and lean protein. You may also want to limit shellfish and tuna if you eat a lot of it, due to the mercury content. If you do eat a lot of fish, try adding cilantro to your diet. This helps to remove mercury. Be sure to limit alcohol or stop drinking altogether.

3.   Eat foods high in chlorophyl. Dark, leafy greens are a great source of chlorophyl. Wheatgrass, blue green algae, and chlorella are also great for detoxifying the pineal gland and especially help to rid the body of fluoride. You can also find these in green superfoods supplements.

4.   Reward yourself with chocolate. Raw cacao can stimulate and detoxify the pineal gland due to its high antioxidant content.

5.   Take iodine. Fluoride interferes with iodine metabolism. Iodine chelates fluoride and heavy metals such as mercury, lead, cadmium, and aluminum. Supplementing with iodine can go a long way to detoxifying your pineal gland. Lugol’s 5% iodine solution is a good one to take. But do your research and see what works best for you. Seaweed and kelp are high in iodine content and are easy to add to your diet.

7.   Drink chaga tea. The chaga mushroom has been called the “king of mushrooms” as well as the “third eye activator,” and it certainly has many health benefits. In addition to helping to increase the production of melatonin in the pineal gland, chaga has been shown to support hormonal balance, act as an immunomodulator, heal digestive problems, and keep skin, hair, and nails looking good. Chaga contains high levels of the antioxidant superoxide dismutase (SOD), which has antiviral and anti-inflammatory benefits.

8.   Eat turmeric. Curcumin, the active ingredient in turmeric, has neuroprotective benefits, and studies show that it can mitigate the effect of fluoride-induced neurotoxicity. You can add turmeric to food or take it as a supplement.

9.   Take activator X. Activator X is a fat-soluble substance similar in structure to vitamin A. It helps the body absorb and use essential minerals and helps to expel calcium from the pineal gland. Grass-fed meat and raw milk are the primary sources of dietary activator X. Organ meats such as goose and chicken liver are also high in activator X. Consuming grass-fed butter or organic ghee as a source of activator X is also a great way to get this into your diet. There are also supplements such as X-Factor Butter Oil.

10.  Reduce exposure to EMFs. While technically not a cause of calcification, EMFs can negatively affect the pineal gland by hindering its melatonin production. Common sources are Wi-Fi routers, cell phones, microwaves, smart meters, and TV and computer screens.