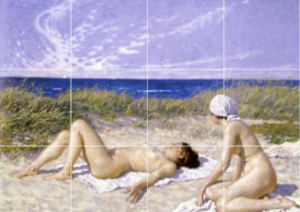 A common misperception is that covering the human body relates to morality.  It is felt that by covering the body, especially the genitals, buttocks and female breasts, sexual activity is limited to what the current culture condones.
Yet, studies of various cultures characterized by total nakedness to total full body covering show no clear correlation between sexual promiscuity and undress.
Plus, no intact culture or society today or in the past has suffered the incidence of STD’s that western society has.

Sexually transmitted Diseases (STDs) may be construed as a measure of a society’s level of sexual promiscuity. Western society is able to survive the effects of venereal diseases of epidemic proportions due to rampant sexual immorality only through the intervention of extensive medical treatments, which are woefully inadequate.

Clothes frequently represent guilt and an attempt to deny the sexual thoughts and desires every normal person has. Except to the extent that expectation produces its own effect, clothes have no significant value in controlling sexuality. In fact, there is considerable evidence that sexual aberrations are stimulated by clothing practices.
In our society, nakedness is associated with two basic activities, namely: hygienic functions such as bathing, changing clothes, etc. and sexuality. If we were naked at other times as for sunbathing, sports, exercising and even just relaxing, the strong association with sexuality would be weakened.
Now if you were to discard your clothes in public, it would be viewed as criminally or psychologically deviant.
One could not just disrobe because of the heat or tight, uncomfortable clothing.  This would not be accepted as just the matter-of-fact thing it might have otherwise been.
🌞
Sociological studies of ethnic groups in which nudity is common show that no cause-effect relationship can be determined between being naked and immorality.
Social nudists also exhibit this lack of association.  Clearly, many still link nudity with overt sexuality.  From a scientific psychology perspective, the connotation of nudity is no more than a learned sexual fetish.  It is not an innate human characteristic.
The very word ‘nudity’ in western society connotes sexuality and pornography; however, these associations are far from fixed or universal.
In some societies, nudity is totally divorced from sexual overtones.
It may have no significant meaning in itself or it may imply a state of poverty, humility or sacred state of holiness.

UNLEARNING the sexual connotation of nudity as nude activities can afford you many physical and health benefits:

Physical and Psychic Benefits of Nudity
If you assume that NEARLY nude would accomplish the same thing, remember that there are vital reasons to particularly expose the very body parts that “modesty” might want covered. It is precisely the skin of the genitalia, buttocks, perianal areas and breasts which benefits most from the drying and cooling effect of free air flow as well as the drying antimicrobial and other desirable attributes of sunlight itself. Logically, if any parts should be covered at all it would make more sense to cover the face and hands since the skin of these parts is already liable to more than its share of sunlight, etc. by ordinary daily activities in the clothed state. TOTALLY nude at appropriate times is really the only way the full benefits can be obtained.
Sociological studies have shown that social nudists generally have higher moral values than the general population. In addition, nudist families are more stable than average. Children exposed to the social nudist lifestyle grow up with [FAR] fewer sexual hangups and aberrations than control groups. This should not be surprising since much sexually deviant behavior has a significant component of exhibitionism or voyeurism, the point of which is largely lost in a totally nude group of people.
Make nakedness a common daily experience, unassociated with sexuality, so an unhealthy interest in porn is lessened.
The prospect of non-sexual nudity could generally be expected to generate at least a limited heightened concern for our own body appearances.
This is highly desirable as it fosters better attention to diet, exercise and other lifestyle considerations.
It’s impractical to be totally nude at all times. Functional outerwear is often necessary to protect us against excessive heat or cold. Clothes may guard against too much sun or ultraviolet exposure, rain, snow, trauma and work place injury. Pockets are useful. Uniforms may be necessary for identification and other purposes. There are useful sanitary functions of clothing. No one could reasonably deny these important and legitimate purposes of clothing but this is not to say that nudity does not also present important and legitimate purposes at appropriate times and in appropriate places.
Clothes serve many useful functions even though successfully improving morality is not one of them. In fact clothes are frequently overtly designed to be particularly sexually provocative and often, if not usually, are more sexually arousing than total nudity might be. It would be a step toward better psychological and physical health if we could accept public nudity in a matter-of- fact way at least to a limited extent. Certainly no one would be harmed by such a practice in designated areas and at designated times for specific legitimate purposes as sunbathing, exercising and for various sports. Many people have enjoyed nude jogging, swimming, sunbathing and other similar activities in secluded places for years. Not everyone has convenient access to isolated places where this can be done privately without possible offense to others. It would be an appropriate use of public areas such as parks to have designated, clothes-optional, areas and times when legitimate nude activities are permitted. Actually, it could be argued that it’s even more appropriate to turn the situation around and designate times and places where clothes must be worn (textile areas) so that those who are offended by the natural body state and who are unable or unwilling to separate nudity and sexuality, can assemble together without fear of having to deal with nature and the truth.
Let us all look forward to a time when society’s vision will be cured of its crippling moral myopia.
Certainly standards of morality are essential to the efficient functioning of a society and as a framework for dedicated, potentially vulnerable interpersonal relationships.
The issue is how society now confuses morality with fashion and convention.God’s most beautiful creation is the human body, genitalia and all!

Yet, know that your body is a wondrous creation and you are the most marvellous being ever created.  Beautify yourself even more by optimizing your lifestyle with the following: