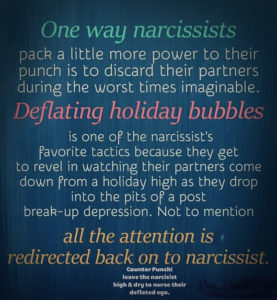 Are you being smeared by a narcissist?  If so, read the following to find out how to help yourself.

The smear campaign is used, so the narcissist can keep their false self hidden.  You’re the crazy one, trouble maker and abuser.  Everything they did to you, they make out you did to them so they can walk free, from any responsibility.

It’s a method they use so as to get their reality in first. They usually start this before the relationship is even over, and you will  likely have no idea it’s happening. You may find out from someone around you. The narcissist might have also told someone you know things that the narcissist knows will inform you. So they can watch you react. Possibly the first you’ll know about the smear campaign is if you decide to stand up for yourself and try to tell someone who they really are. Or when you have escaped.

You may get blank looks, or shaking heads of disbelief from others, which is terrible when you really need help.

1. You are the abuser, and they will tell people how cruel you are, either not letting them have their say, not letting them go out with friends, always stalking their phone, not looking after the home or children correctly, which can happen due to the narcissists manipulation and gaslighting. Not showing any affection to them. Locking them out of the house, (done out of fear.) to pouring freezing cold water over them while in the bath, pretending it’s a joke. They will give a long list while making out how good they were putting up with you. They will either tell all the things that they did to you, yet twist the fact you did it to them, or say how you reacted while missing out the part of what they did in the first place to cause your reactions.

2. Money, they tell others they work hard every day to earn money, while you just spend all their money. If you saved carefully for six months to buy a new coat, they would tell people that you’ve blown their money again. Again if you’ve been with a narcissist you likely already know they try to bleed you dry. I shall add financial abuse at the end. They will say you’re a leach and a freeloader.

3. The narcissist will tell others that you’re crazy misfit, but they need a formal diagnosis so they say things like. “they’ve got mental issues. I’ve tried to help, but they’ll not listen. I don’t know what else to do.” Yet again, they entirely miss out what they’ve done to you, and are indeed talking about themselves. The more you try to point out it’s them and not you, the crazier you look, which is why staying out of the smear campaigns is your best defence, it’s difficult as it’s human nature to want to defend ourselves and set the story straight, yet with the narcissist’s manipulation of others when we do, our actions often match their words, when we don’t their words are just smoke without the fire.

5. They will make out, you don’t give them any love or affection, that you have been cheating on them, they’ve tried over and over to provide you with a second chance. They will tell people who gossip first to spread it further. They twist the story to play the victim and gain attention in any way they can. Yet this is what the narcissist actually did to you.

6. They might say you have an online gambling issue.  If you drink now and again, they say that you’re an alcoholic, if you’ve gained weight, they’ll blame it on your addiction to take away food, as they have already told people that you’re no longer taking care of the house, this in people’s minds makes them jump to the wrong conclusions. The smear campaign is the narcissist’s protection as they tell others what you’ve been doing to them, which indeed is most often precisely what they did to you. They will tell people what they did but saying it was you, it’s very believable as they know what to say all the ins and outs in a compelling way. You cannot stop them before they begin as you’ve not worked out what they are or what they are doing.

What Can You Do?

1. Stop emotionally reacting to the narcissist. Never let them know it’s bothering you. If they get no reaction, they switch tactics.

2. If people approach you, to get gossip, just say “ I know they’ve told lies, I’m not interested in listening or defending myself, the truth will out one day” this will stop them from spreading more gossip. Add “the police is looking into it.” Or the ”wow this is fascinating almost movie-like, I’m on the edge of my seat, please tell me what I did next.” Gossips usually get confused by this response, as they are looking for more gossip from you.

3.   Do not defend yourself to others. It doesn’t work; the narcissist gets in there first. People asking questions are only interested in more gossip. Instead, concentrate on helping yourself heal. They will always carry on being a narcissist and not change. Yet people will see how much happier you are without them, and they will then make their own judgment call.

4. If you need support, only talk to trustworthy friends. Or online help, to recover. Do not talk about it to those who believe the narcissist lies. Who’s blaming you and believing them, you know better than anybody, how well a narcissist can lie and manipulate. So don’t hate them, they’ve just been used, by the narcissist. Sadly, they will learn in their own time of the narcissist’s toxic nature.  You cannot show them, they have to learn for themselves.

8. The best response is to ignore it all, third party’s that have been told soon find something else to gossip about. The fact you’ve ignored it will genuinely anger the narcissist. They know it works best when you’re at your lowest point, as you may look crazy, rise above heal yourself. The narcissist will always be stuck with themselves, repeating their same destructive behaviour patterns, and you can walk free.