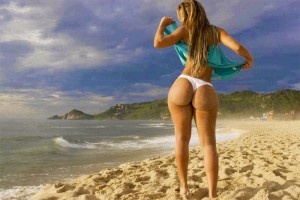 While human nature may always be a mystery, the male mind is clearly not!

There’s no denying looks change and preferences shift, but in terms of identifying what men want, just study the trends. Today, the big booty phenomenon is dominating the cultural scene, which has left some women on top and others at the gym.

According to research, men are not really into the big booty; rather, the spine has captured their attention. According to the researchers from Turkey’s Bilkent University, men are into women with a 45 degree curve in their spines. Indeed, the spine that makes the butt look bigger, not the actual junk in the trunk. Like all else, this is due to evolutionary reasons. A curved spine represents a woman’s ability to collect food late in pregnancy, as well as give birth with greater ease. But beyond evolutionary and aesthetic reasons, men are attracted to women for their spines for other reasons. Strong women are attractive, women with backbone are sexy. Women who can stand on their own are desirable. As much as we wish to think it’s about science and evolution, there’s another way of looking at it. The spine may accentuate the butt, but it’s also a metaphor for something greater. What actually makes a woman desirable has more to do with the strength of her theoretical spine that her butt. 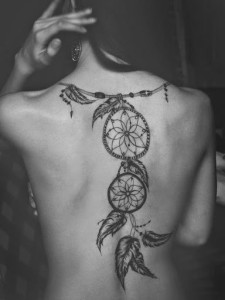 She stands up for what she believes in. A woman with spine doesn’t cave under pressure or popular opinion. She has strength and determination in her actions and her ideals. She can’t be pushed around or stepped on because even though she may have some curve, she stands straight in her beliefs. She’s the kind of woman who isn’t fooled by mass opinion or individual hate.

She gives it to you straight. A strong spine may be intimidating at times, but to her, it’s more important to be real than just another woman telling you what you want to hear. She may not have all the answers, but she definitely has all real opinions. She is unafraid to tell you how just she feels or say what’s on her mind. She may have a soft heart, but her backbone stays strong.

She doesn’t fall easily.  She can be pushed down like anyone else, but it takes far more to do it. She has strength of character and will. She isn’t going to just take the hits that life gives her and refuse to give up. Her spine affords her the needed support to keep going, even when everyone else is trying to stab her in the back.

She’s strong enough to carry your burdens.  She carries more than just her own stuff.  A woman with spine carries the load of everyone she cares about. Her spine is full of love, secrets and betrayals.  If she’s walking around with some curve it’s only because she’s bending over backwards for someone.

She puts her back into it.  She doesn’t do anything in a flippant manner. She goes for what she wants and doesn’t give up until the job is done. This woman doesn’t just follow her dreams, she fulfills them. She isn’t worried about the bumps ahead; she may land on her ass a few times, but she always bounces right back up.

She’s a support system. She’s not just holding up herself, but those around her. Her honesty, strength and loyalty make her the center of many relationships. Those who love her, orbit around her, using her as the one stable point of which they all hold on to. As a guiding light and support system, she provides that extra strength for those who lack it.

She’s willing to bend over backwards for you if treated right.  She may be hard to pry open, but once you do, she exposes another world. She stands straight on her own, but given the proper love and care, she’ll bend as far as she can for you. She’s got more inside her than she lets herself expose and once you get inside, you’ll find more dimensions than vertebrae. She doesn’t just love once, she loves in many ways.

She’s hard to break.  You can kick her, knock her down and belittle her, but she perseveres. She is as tough as the vertebrae that hold her together and it will take more than your opinions to bring her down. She may seem unbreakable but with a hard enough blow, she can be broken, like everyone else.